Your lips are sealed

With the world’s attention diverted to Venezuela, whose democratically elected ‘dictator’, Hugo Chavez, has not renewed the license of a broadcaster implicated in the 2002 coup that briefly overthrew the elected government and replaced it with a ‘democratic’ junta more to Washington’s liking, Pakistan’s actual military dictator, General Pervez Musharraf, yesterday provided new powers to the Pakistan Electronic Media Regulatory Authority (PEMRA). 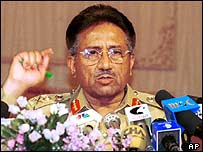 Just months after parliament had legislated on the relevant issues after years of consultation the new ordinance empowers PEMRA to act against media outlets independent of the committee established for the purpose. Dawn reports

The ordinance thorises the Pemra to confiscate the equipment of broadcasters and seal the premises without consulting a council of complaints.

The council was envisaged in the amendments passed in February. The amendment increased the fine for violators to Rs10 million from the existing Rs1 million.

Some 10 amendments were made in the Pemra (Amendment) Act passed in February this year. An amended sub-section (5) of Section 29 reads: “Provided further that the Authority or the chairman may seize a broadcast or distribution service equipment or seal the premises which is operating illegally or (in) contravention of orders passed under Section 30.”

Freedom of expression as understood in precludes criticism of the military or the judiciary, so that is the context in which to construe the expression ‘operating illegally’. Two privately owned television stations, Aaj [‘today’] and ARY One World, had already been denied permission to do live broadcasts under existing rules.

A new provision -- Section 39 (A) -- even thorised the Pemra to make rules and regulations on its own from time to time by simply issuing notifications. It says: “The Authority may, by notification in the official gazette, make regulations, not inconsistent with the ordinance and the rules made thereunder, to provide for all matters for which provision is necessary or expedient for carrying out the purposes of this ordinance.”

As soon as the new ordinance was announced, journalists took to the streets of .

Meanwhile, the National Security Council ‘agreed to draw up a multi-pronged strategy to deal with terrorism and extremism and create employment opportunities for the youth, especially in Fata [Federally Administered Tribal Areas bordering ] and the NWFP [].’

In a move that would be derided as populist opportunism if President General Musharraf were not such a good friend of the Free World and such a close ally in the war of terrorism, he asserted

…that the new federal budget would be a catalyst in bringing about a qualitative change in the life of the poor and ensuring fast economic development. He said poverty would be brought down and job opportunities created through a record Public Sector Development Programme. He said massive economic development activities would be generated as a result of massive allocations for various development projects.

President Musharraf said the country had achieved record economic growth. He underlined the need for transferring the benefits of development to people at the grass-root level. He said measures would be taken to ensure the availability of essential items at subsidised rates. He said steps were being taken to check price hike, especially of items of daily use. He said measures would be taken to check inflation.

He said salaries and pensions of government employees would be increased.

In an apparent rebuff to General Musharraf, Dawn reported that yesterday, the Supreme Court ‘turned down federal government’s request for initiating contempt of the court proceedings against the Supreme Court Bar Association (SCBA) for defaming the judiciary and military at a seminar’.