Heading their 17 March press release '49% Say Israel Should Stop Building Settlements As Part of Peace Deal', Rasmussen reported last week on their 'National Survey of 1,000 Likely Voters Conducted March 15-16, 2010'.
At first I thought it was just a headline, but it turns out that what they actually asked was,
As part of a Middle Eastern peace agreement, should Israel be required to stop building new settlements in occupied Palestinian territory?
Leaving aside the little matter of the commonplace that an agreement between Israel and the PA, which is what they mean, applies to the entire Middle East, as the expression 'a Middle Eastern peace agreement' suggests, this is a curious way to frame the question.
All previous versions of the two state 'solution' have explicitly aimed to end the occupation of at least some of the territory that Israel seized in June 1967. Obviously Israel occupies all of Mandadory Palestine, but the likelihood that those drafting the question or those responding understood it that way is vanishingly small.
At least on the face of it, as I read it, the question assumes that the agreement will countenance continued occupation of 'Palestinian territory' – the West Bank and East Jerusalem, since the occupation of Gaza no longer involves building new settlements. So the question becomes not whether the occupation should end, or even whether existing settlements should be evacuated, but only whether new ones should be permitted as part of the envisaged peace agreement.
Taken at face value, it seems preposterous that anyone could imagine even the craven PA would agree to a 'peace' that entailed continuing occupation of the West Bank and East Jerusalem, much less an occupation with ongoing settlement expansion. But 29% of the respondents said they didn't think the agreement should require Israel to stop building and another 22% weren't sure. Even the 49% who thought construction should stop were prepared to accept continuing occupation.
On reflection, however, it's not as farfetched as all that. I'm not aware of any advocate of partitioning Palestine into a Jewish state and a Palestinian state who doesn't envisage some kind of 'land swap', which, as I've emphasised repeatedly, retroactively endorses Israel's cynical construction of facts on the ground for the past four decades and more.
In any case, I think it's clear that what Rasmussen meant and what respondents understood them to mean was whether whether Israel should be required to stop building new settlements as a condition for negotiations to proceed towards the Peace Agreement. So why should they stop building on the areas they plan to annex – in other words, continue to occupy?
It's a bit of a disappointment to learn that Rasmussen would field a survey with such shoddy question wording. I had somehow formed the impression that they were professionals.
In the same vein, they ask,
As part of a Middle Eastern peace agreement, should Palestinian leaders be required to acknowledge Israel’s right to exist as a Jewish state?
It's worth noting that acknowlege is a 'factive' verb – one that assumes the truth of its object. So there is no question whether Israel possesses the 'right to exist as a Jewish state', just whether Palestinian leaders should be forced to admit it. It's bad enough when you find these semantic tricks in journalism, although it's common enough that you have to expect it, but to insinuate such a contentious assumption into a survey question like that is truly beyond the pale.
Again, as I've written before, to 'acknowlege' Israel's right to exist as a Jewish state implies endorsing the ethnic cleanisng that enabled Israel to establish a Jewish majority in the first place and relinquishing the refugees' right to return – hardly a strong foundation for a peace agreement. Even so, 75% of those polled agreed that Palestinian leaders should be required to make such an acknowlegement, and 20% weren't sure, even though it's obvious that any leader doing so would certainly not retain a position of leadership for long.
Rasmussen only tabulate the results of three other questions, although from the breakdowns they report in their press release it's clear they asked others. One of these revealed that 73% don't consider a 'lasting peace' within the next decade likely and 58% consider Israel a US ally, while a surprising 32% think it's 'somewhere in between' an ally and an enemy.
Like last year, it's once again thanks to Richard Silverstein that I learned of the latest J Street poll, conducted 17-19 March. A quick look suggests that this year Gerstein | Agne, J Street's pollster, has not lifted their game, asking many questions about the US national interest and such. The only thing that struck me as worthy of comment was the headline of their press release, which proclaims 'American Jews Continue to Support Obama Push for Two-State Solution...', when in fact, they didn't even ask about the two state 'solution' or any aspect of it. But I'll have a closer look in due course and post something if anything comes to light. For my analysis of last year's J Street poll, see 'Across the Potomac'. I also had occasion to compare last year's J Street results with those from the Anti Defamation League and the American Jewish Committee's polls in 'A feather in our cap'.
Meanwhile, Zogby released their latest poll on the subject yesterday. I haven't managed to find the questions or a tabulation of the responses on their site, so I was forced to watch a video of John Zogby presenting the results to the New America Foundation. He claimed he'd selected the most interesting for his slideshow, but I can't say that anything piqued my curiosity. It seems that Republicans think the US should side with Israel, while Democrats think the US should be evenhanded. As if.

Posted by Ernie Halfdram at 10:52 3 comments

You might have thought that if it was anybody's job to look after Israel's occupation forces, it would have to be the Israeli taxpayer.  But it transpires that

Friends of the Israel Defense Forces (FIDF) has assumed the responsibility of providing these soldiers with love and support in an effort to ease the burden they carry on behalf of the Jewish community worldwide...with the mission of providing and supporting social, educational, cultural, and recreational programs and facilities for the young men and women soldiers of Israel who defend the Jewish homeland...Providing financial aid to soldiers in need, granting academic scholarships to former combat soldiers, helping bereaved families, and sponsoring fun days for combat battalions are just some of our endeavors...reinforce the significant bond between the Jewish community in the United States, the soldiers of the IDF, and the State of Israel.

FIDF builds sports and cultural centres for the IOF all over Israel and, if I read the map correctly, in the West Bank, as well as providing mobile recreational facilities for those too busy humiliating Palestinians at remote checkpoints or bashing down doors in the middle of the night to get to one of the more permanent centres.
If IOF soldiers carry the burden of occupation and oppression 'on behalf of the Jewish community worldwide'  doesn't that constitute 'Holding Jews collectively responsible for actions of the state of Israel', one of the ways 'in which anti-Semitism manifests itself with regard to the state of Israel', according to the EU Monitoring Commission's 'Working definition'?
Anyone who wants to contribute to this blatantly antisemitic project is in luck.  Next Tuesday, 9 March, FIDF is holding its National NY Gala in the Grand Ballroom of Manhattan's historic Waldorf-Astoria, where

More than 1,300 people will gather together to support Israel’s soldiers and the State of Israel. At the dinner, you will have the unique opportunity to hear from Lt. Gen. Gabi Ashkenazi Chief of the IDF General Staff and meet combat soldiers who fight on the frontlines to ensure the safety of the state of Israel.

For just US$180,000, you can book a table for ten, although only $179,678 of that will be tax deductible.  Or if you're too tightfisted to fork over a week's pay to defend Western Civilisation from the barbarian hordes at the gate, you can buy a seat for $1000.  I just can’t help wondering how much of contributions to Friends of the Izz ad-Din al-Qassam Brigades or Friends of the Army of the Guardians of the Islamic Revolution, or even Friends of the Canadian Land Force Command would be tax deductible?
Alternatively, you can join the protest march, assembling at 53rd Street and Lexington Avenue at 5PM on the day - next Tuesday, 9 March.
[H/t to Lou Proyect]

Posted by Ernie Halfdram at 12:43 2 comments

Labels: antisemitism, Friends of the IDF

When I got home yesterday, I found this promotional message from Ha'aretz in my inbox. 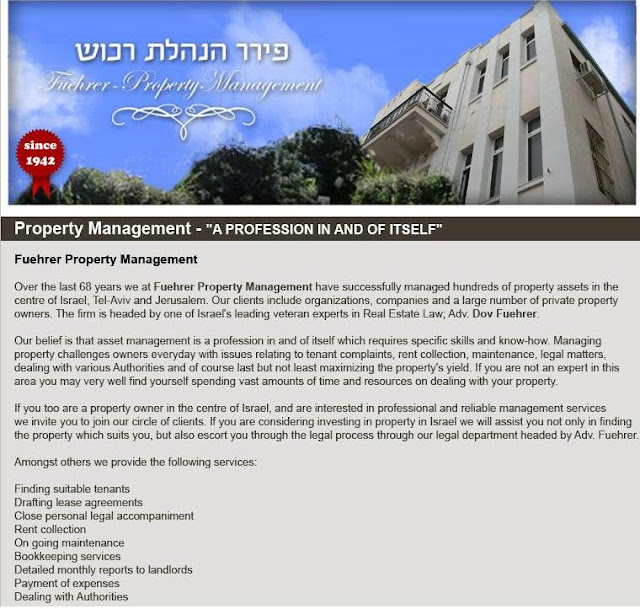 Headed 'Property Management – An Occupation In and Of Itself', at first I thought it must be a spoof, an impression further buttressed by the principal's unfortunate surname.  But it turns out that there really is a Dov Fuehrer at Firer Property Management, providing professional services to absentee landlords who 'own' stolen land.  On reflection, I surmise that 'An Occupation In and Of Itself' was just a curiously revealing variation on 'A profession in and of itself'.
Meanwhile, Ha'aretz also alerted me to the opportunity to 'come home for Pesach' and enjoy a week of five star festivities at the Inbal Jerusalem Hotel for just US$2240 per person, exclusive, I gather, of airfares.  Newsflash: I am home.

Posted by Ernie Halfdram at 07:09 4 comments