Better than the bhatta

‘For our people, this is the kind of work we do,’ 20 year old Vanita Khabhu told Somini Sengupta. She ‘had once imagined a life beyond these kilns….She left school after the second grade and cannot read or write…Her future, she knows, will be decided by the man she marries. If he and his family work in the kilns, she will join them.’

As she ‘tosses bricks to her brothers, two by two, in a seamless human chain’ her sister in law ‘takes a break to breastfeed her 2-year-old near a pile of black clay.’

For every thousand bricks, they earn a bit less than $5.50. The family, with five adult laborers, pockets on average a little more than $2 a day.

This is the life behind the great Indian construction boom, propelled by an economy still growing at 9 percent a year.

The Khabhus said they gave up when seawater from the nearby crept in and killed their fields. Since Vanita was a child, the family has roamed the country in search of work — in construction and road-building, and finally, here to this brickyard.

Of all the backbreaking work available to the poorest Indian peasant, making bricks offers some of the best earnings. It pays better than making salt, or working in the roof-tile factories. It can allow families to build a proper house, pay for a wedding or buy a goat or a television.

But the work is hazardous, especially at kilns like this one. Smoke spills out everywhere…blackens… the lungs of the people like the Khabhus, who live and breathe bricks. Home is a small room made of bricks, on the edge of the kiln. They sleep on cots outside.

On most days, they work 14 hours, breaking for meals and sleep during the hottest part of the afternoon, when temperatures climb to more than 110 degrees Fahrenheit [43 C.], and that is not counting the heat that rises from the kilns day and night.

An extra pair of hands always helps, even if they belong to a child…Attempts have been made to wean children away from work…At this brickyard, school is a patch of ground in the shade of a tree, with a chalkboard and children sitting in two neat rows. Classes are held for three hours each morning. The children are back at work later.

In neighbouring , small scale brick manufacture is also a big employer. Under the peshgi system, reminiscent of the debt slavery in the Bolivian sugarcane industry, or the coal mining industry in West Virginia and Kentucky of yore, whole families are bonded to work for ‘feudal’ bosses to repay unpayable debts. (Thanks to Eli Stephens for the dio link.)

Even though the 1992 Pakistani Bonded Labour System Abolition Act outlaws the peshgi system, cancels debts, and provides for fines and prison sentence of up to five years for violations, the practice continues, with as many as eight million Pakistanis still working in bondage, 1.8 million of them in the kilns (bhatta). Unsurprisingly, most bhatta workers are illiterate and innumerate, so they can’t calculate when their original debts and the arbitrary fines the bosses impose on them are discharged.

In an amazing development, in April last year over a million illiterate bonded workers in the Pakistan Bhatta Mazdoor Union (PBMU) organised a major eight day strike that

crippled the functioning of some 15,500 kilns across the country on which 's massive construction industry depends…

Apart from better wages and kiln registration, the workers demanded an end to the humiliation of women workers at the hands of the owners and the withdrawal of all false cases registered by the police at the behest of the owners.

"We call this a positive strike as to quite an extent our demands have been met," Rahu said, explaining wages per thousand bricks have been increased from 220 rupees (3.6 U.S. dollars) to 350 rupees (5.3 dollars). "The government has assured us that if the owners do not put an end to the peshgi system we can approach the court (earlier it was impossible to register cases against the owners)."

Most importantly, the government has stepped in with a promise that the brick kilns would be registered soon. "The government has promised to start the process and we will see if they keep to it in the next six to eight months. If they don't, we now know how to get our way -- we will protest again," Rahu said.

And yet, Farooq Tariq, general secretary of the Labour Party Pakistan, wrote in April that the bhatta workers in Sindh were still only getting Rs 110 to 190 (US$1.81 to $3.13) per thousand bricks and went on strike again from 31 March this year. Although they lifted their strike camp on 8 April, the bhatta bosses failed to turn up for scheduled meeting and have sent the police to arrest the strike leaders.

Of course not everyone in and works in the bhattas. David Phinney reports on AlterNet

Soon after the State Department awarded a $592 million building contract to First Kuwaiti General Trading and Contracting in July 2005, thousands of low-paid migrant workers recruited from South Asia, the Philippines and other nations poured into Baghdad, beginning work to build the gargantuan complex within two years time…construction crews lived in crowded quarters, ate substandard food and had little medical care. When drinking water was scarce in the blistering heat, coolers were filled on the banks of the Tigris, a river rife with waterborne disease, sewage and sometimes floating bodies, they said…First Kuwaiti held the passports of workers…Some laborers had turned up “missing” with little investigation.

Howard J. Krongard, the State Department’s inspector general, flew to for what he describes as a “brief” review on Sept. 15. He now reports that the complaints had no substance.

One former labor foreman at the embassy site who recently read Krongard’s review called it “bull shit.” Another former First Kuwaiti employee viewed it as “a whitewash.”

…former Army emergency medical technician Rory Mayberry found in March 2006. First Kuwaiti had hired Mayberry as a medic under a subcontract…Mayberry says he found the most basic of medical needs missing and that clinics lacked hot water, disinfectant and hand-washing stations. Mayberry also claims that workers’ medical records in total disarray or nonexistent, beds were dirty and the support staff was poorly trained. Prescription pain killers were being handed out "like a candy store ... and then people were sent back to work,” to operate heavy equipment or climb scaffolding, he adds.

Several workers had died prior to Mayberry’s arrival, perhaps becse of improper diagnosis, and he recommended an investigation. Days after reporting the problems to First Kuwaiti and the State Department, Mayberry was taken off the site and discharged.

Pl Chapman, who worked for a subcontractor to First Kuwaiti “I’d see them eating alongside the road or near their trailers.”

But what bothered Chapman more was the disappearance of seven workers from , and the who were listed as “missing” on First Kuwaiti rosters. Fearing they may have been killed and dumped into the , he began pressing embassy officials overseeing the project to investigate. “They told me to forget about it becse the workers had probably found other jobs.”

Since workers were rarely allowed outside the project area, it was a mystery how they would have found other jobs. Even more puzzling was that they may have left without passports.

Supplementing Krongard’s review, the coalition Multi-National Force inspector general in …did find workers from , , and who reported deceptive hiring practices by recruitment agencies in their home countries. They said they had been promised higher pay, shorter hours and days off.

In an ominous reminder of home

“A large majority of workers” from the Indian subcontinent incurred recruiting fees of up to one year’s salary.

Chapman and others also claim that standard safety procedures on the project frequently went unobserved. Many worked without safety harnesses when off the ground and had no hardhats or boots…Some worked in sandals, others in bare feet. “They had their toes curled around the rebar like birds,” [Project manager Juvencio] Lopez remembers.

who adds that he never witnessed a safety meeting. Once an Egyptian worker fell and broke his back and was sent home. No one ever heard from him again. “The accident might not have happened if there had been a safety program and he had known how to use a safety harness,” charges Owen, who left the embassy project last June.

believes that First Kuwaiti is one of the best companies he has ever worked with, adding…workers come from impoverished countries and are eager to work under any conditions. “Just look at where the workers came from,” he says. “They were much better off in .” 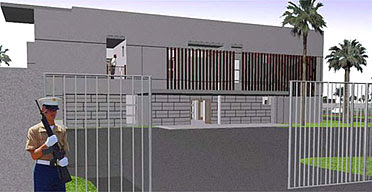 Computer-generated images of the US embassy complex in Baghdad were posted on the architect's website. Photograph: AP

America’s glittering Emerald City, the largest, most impressive most heavily fortified embassy in the world with over 20 buildings covering 104 acres (42.1 hectares), nearly the size of the Vatican, will be a testament not only to the might of the imperialist hyperpower, but also to the fundamental principles of capitalist exploitation – cutting costs whatever the price in human life and limb. Anyway, they’re just foreigners and it’s better than the bhatta.