Yes. I’ve been on the road. Still am. For an account of part of my trip, check this link.

But I couldn’t resist drawing this cartoon to your attention. This modern world has been a little disappointing in recent weeks, but Tom Tomorrow seems to be back in form. Here is an excerpt – click on it to go to the whole cartoon. 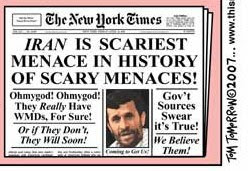 While on the topic of cognitive dissonance, I note that White House press secretary Tony Snow yesterday dismissed

“…this notion afoot, or at least an attempt or an inclination, somehow we’re going to invade ”

At the same time reassuring that

“We always maintain the option of striking actionable targets, but we also realise that is a sovereign government and a very important player in the war on terror,” he added.

…any military action inside our borders under an excuse of hunt for Al Qaeda militants will not be acceptable…If any such attack is made, it will be a sheer breach of international laws.

According to the report in Dawn,

Her comments apparently irked American journalists. They pressed Mr Snow for a response at a regular White House briefing.

And what self respecting American ‘journalist’ could fail to find such audacity irksome? Who does Ms Tasneem think she is to suggest that the military should refrain from carrying out attacks within the borders of her country? The cheek!

Posted by Ernie Halfdram at 19:20 4 comments