The essence of democracy

At a joint press conference with the Leader of the Free World on 4 March last year, Pakistani President Pervez Musharraf said,

… we have introduced the essence of democracy now in . It has… never existed before…we have liberated the media and the press…the result of my democratization of , opening the society of the media -- the print media and the electronic media, both. And they're totally liberated…Sustainable democracy has been introduced in and will prevail in … 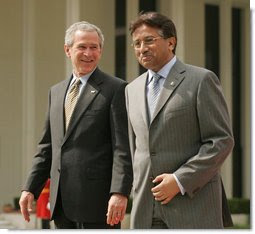 It turns out, however, that Information Minister Mohammad Ali Durrani may not entirely agree. As today’s Dawn reports,

“The events of the past two months have brought into sharp focus the issue of freedom with responsibility and a matter of concern for everyone within the government or outside it,” the information minister said.

He said that the judicial issue, which required a judicial verdict, had been politicised to the extent that the Supreme Court’s own directives were also not adhered to…

“The armed forces of have … embraced martyrdom whenever the country faced any threat. Be it an ordinary soldier or a general, the commitment to the defence of is immeasurable.

“We cannot, therefore, let the defenders of our frontiers be maligned and defamed,” the minister said.

“An element clearly violated the limits that the Constitution and the law of the land put on every citizen about protecting the honour and respect of the judiciary and the armed forces,” he said, indicating that such moves warranted action.

Information ministry officials said the government, while using some Pemra [Pakistan Electronic Media Regulatory Authority] laws, was planning to make it mandatory for televisions channels to seek prior permission for live coverage of outdoor events. If applied strictly, the government may restrict all live coverage, particularly of events like opposition rallies or events relating to the judicial crisis.

She had arranged its lnch at the exclusive Islamabad Club.

But the thor told a surprised dience that not only the club cancelled the booking of its ditorium, “all hotels in Islamabad were also told” by unspecified thorities not to allow the use of their halls for this, forcing the organisers to find a sanctuary at a third-floor room provided by a non-governmental organisation.

Declan Walsh wrote in yesterday’s Guardian, that the pioneering study valued the Pakistani military’s business interests at nearly US$20 billion, as well as 4.8m hectares of public land.

Five giant conglomerates, known as "welfare foundations", run thousands of businesses, ranging from street corner petrol pumps to sprawling industrial plants. The main street of any Pakistani town bears testament to their economic power, with military-owned bakeries, banks, insurance companies and universities, usually fronted by civilian employees. Ms Siddiqa estimates that the military controls one-third of all heavy manufacturing and up to 7% of private assets.

Of the 96 businesses run by the four largest foundations, only nine file public accounts. The generals spurn demands by parliament to account for public monies they spend.

The military's penetration into society has accelerated under President Pervez Musharraf, who has also parachuted 1,200 officers into key positions in public organisations such as universities and training colleges. The military boasts that it can run such organisations better than incompetent and corrupt civilians. 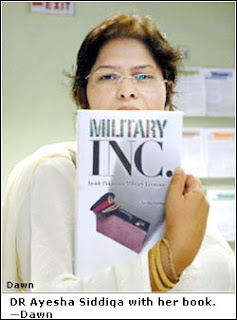 But according to Dr Siddiqa,

the military businesses thrive, thanks to invisible state subsidies in the form of free land, the use of military assets, and loans to bail them out when they run into trouble. "There are gross inefficiencies and the military is mired in crony capitalism…They are not designed for the corporate sector."

"Over the past three years a lot of my friends have advised me not to publish this book. They think I have suicidal tendencies." 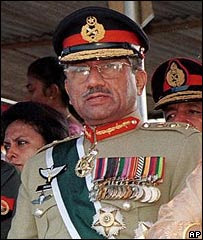 While the serving and retired brigadiers enjoy their sinecures, their prestigious university rectorships, and their ill gotten gains, Bakhtawar Mian reported in Monday’s Dawn that

The Asian Development Bank has found serious flaws in the Zakat distribution programme and termed it politicised and vague with poor implementation procedures and no accountability or monitoring system.

The Zakat is an Islamic tithe intended principally to relive poverty that all Pakistani Muslims are required to pay by law.

Political agendas are easily injected into the programme implementation due to excessive discretionary powers conferred on the local committees. Moreover, the programme requires no public disclosure of the final list of beneficiaries and reasons for selecting them, and has no system of appeals or public accountability, the study says.

…“Studies have shown that under the Zakat programme, beneficiaries need to bribe officials to get the money to which they are entitled. This is the result of an organised mechanism of bribery that ensures leakages to the extent that a deserving person might not receive any money at all. Moreover, payments to subsistence recipients are not made regularly, sometimes for months on end,” the report further says.

And that’s why Musharraf can boast, ‘We have empowered the people of now -- they were never empowered before…’