In a survey 'American Public Opinion on West Bank Settlements' conducted between 25 March and 6 April WorldPublicOpinion.org poll found 'that three-quarters of Americans think that Israel should not build settlements in the Palestinian territories'.

Of course it's not as simple as that. In reality, they asked this question twice:

Do you think it is all right for Israel to build settlements in the Palestinian Territories, or do you think they should not?

First they divided the sample into four groups, presumably of equal size and equally representative of the population sampled. They asked groups A and B – half the sample - the question prefaced with the wording:

A highly controversial issue is that Israel has built villages for Israelis, called settlements, in the Palestinian territories in the West Bank.

If nothing else, the results of the survey suggest that the issue isn't as controversial as all that, and I think it's a trifle disingenuous to describe the settlements, which house nearly 10% of the Jewish population of Israel, as 'villages'. But at least it's a little more honest than the 'neighbourhoods' you find in the media. It was 75% of this group (claimed 'margin of error' ±4.5%) that said Israel 'should not build' settlements.

They then presented three quarters of the sample – groups B, C, and D – with these statements, which they claim are based on advice from 'the Israeli embassy in the US and the Palestinian Mission at the UN':

Q35 UN resolutions 242 and 338, which were endorsed by nearly all members of the UN, including the US, called for Israel to withdraw from territories it invaded in the 1967 war. Thus, for Israel to build new settlements in these areas is illegal under international law.

Q36 Israel has a right to build settlements in the West Bank because Jews have lived in these areas for centuries and have legitimate historical claims to property there.

It may be valid to describe a position that the Israeli Ministry of Foreign Affairs advocates as 'the Israeli position' [my emphasis], although I doubt more than a handful of Israeli Palestinians would agree. But that certainly is not the case with the Palestinian UN delegation, which only represents the PA, and not Israeli Palestinians or the millions of refugees in the diaspora. Furthermore, as currently constituted, the PA is a 'government' appointed by Fateh, the party that lost the 2006 election, so it doesn't actually represent anyone.

UN Security Council resolutions 242 and 338 were carried by a majority of the fifteen members of the Council, not 'nearly all members of the UN'. UNSCR 338 is only relevant insofar as it calls on the parties to implement 242. The withdrawal clause in 242 is relevant, but perhaps not quite as apropos as Article 49 of the 4th Geneva Convention, which states, 'The Occupying Power shall not deport or transfer parts of its own civilian population into the territory it occupies', although both are subject to cynical, casuistical interpretation. What's most disturbing about Q35 is the reference specifically to 'new settlements', which leaves you wondering how respondents might have interpreted it – are the illegal settlemets the ones that were new in 1967, when 242 was passed; in 1973, the date of 338; or just the ones that haven't been built yet?

Q36 is also problematical. The obvious interpretation of the English 'present perfect' – have lived – is to depict a situation that extends into the present. While this is not the only possible interpretation, the suggestion of continuity distorts the actual situation.

After answering Q35-36, the second half of the sample - groups C and D - were asked the same question as groups A and B answered without reading the two statements.

Q37 (=Q34) Do you think it is all right for Israel to build settlements in the Palestinian Territories, or do you think they should not?

There are other interesting comparisons to make between the two surveys. This one, conducted by Knowledge Networks, is based on a sample drawn from the entire US population. When selected households did not have internet access, KN provided it. Gerstein | Agne, who developed the J Street survey, and YouGovPolimetrix, the company to which they outsourced the conduct of the poll, are not as forthcoming about their sampling methodology as KN, as discussed in my post about the J Street poll, 'Across the Potomac'.

The demographic composition of the two samples differs markedly. I assume that these differences reflect differences in the populations and are not just an artifact of sampling. With respect to the age profile, note that a much higher proportion of the Jewish sample is in the older age groups. 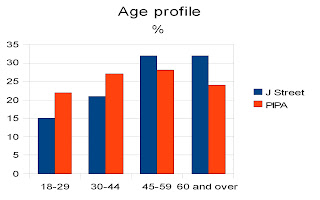 Even more interesting is the education profile. While only 18% in the general population have a degree, more than three times that proportion of the Jewish population – 66% - are graduates, including 36% who claim to have done at least some postgraduate study. Everybody in the J Street sample had finished high school, while 14% of the population in the PIPA study had not. 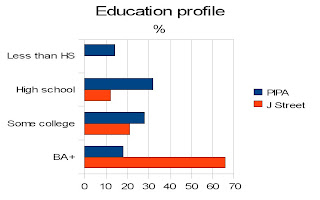 Discrepancies also appear in political party affiliation. Fifty-seven percent of the J Street sample said they were 'weak' (13%) or 'strong' (44%) Democrats. In this poll, only 37% said they were Democrats. If you include those identifying as 'Independent-lean Democrat' in the J Street poll among those comparable to the Democrat category in this poll, the total comes to 67%.

Although Q.60 in the J Street survey, 'From what you know about Israeli settlements in the West Bank, do you support or oppose expanding these settlements?' [my emphasis], is not strictly comparable to Q34/37 in this poll, there is J Street data that may illuminate the issue.

We know that 75% of groups A and B, who answered Q34, that is, without the distraction of the reference to 'new settlements' in Q36, oppose settlement construction. In groups C and D, the proportion opposed was 60%. I think it's fair to split the difference and say overall some 67.5% oppose building settlements.

The J Street poll asked respondents whether they supported a peace agreement, outlining a typical two state 'solution'. Although I discussed the question in 'Across the Potomac', I reiterate it here for your convenience.

The details of that agreement include: a demilitarized Palestinian state in the West Bank and Gaza; internationally recognized borders that include some land swaps allowing for most Jewish settlers in the West Bank to be inside Israel while the Palestinians get comparable land areas in return; Palestinian neighborhoods in Jerusalem become part of the new Palestinian state while Israel retains control of Jewish neighborhoods and the Western Wall in Jerusalem; international forces to monitor the new Palestinian state and border crossings; and financial compensation for Palestinian refugees while allowing some refugees to return to Israel if they meet specific family reunification criteria and the Israeli government approves. [my emphasis]

It's hard to be confident that all those who agreed with this formulation are firmly committed to every provision and nuance in a long and complex question, which is one of the central problems with the J Street survey. But at the same time, I can't see any alternative to assuming that they read it carefully and knew what they were supporting. I surmise, therefore, that if the J Street poll has any credibility, the 76% who said they supported such a deal reckon it was ok to build some settlements on occupied land at some stage. Since we don't know which provision or provisions of the outlined proposal those who didn't support it found objectionable, a maximum of 24% opposed settlements outright. In the 2007 and 2008 AJC Annual Survey of American Jewish Opinion, however, 58% said 'In the framework of a permanent peace with the Palestinians', Israel should not 'be willing to compromise on the status of Jerusalem as a united city under Israeli jurisdiction'. It seems plausible, therefore, that many of those who rejected the J Street 'peace proposal' did so because it provides for the division of Jerusalem. So the proportion of Americans who oppose settlement construction is nearly three times as high as the proportion of American Jews who do so, probably more.

This is actually a bit of an eye opener for me. I had the impression that American Jews were not exceptional in their banal acceptance of Zionism and sympathy for Israel – that this was the norm for Americans generally. It's a mild relief to learn that support for Israeli war crimes is so significantly lower among the general population, even though the sample included 26% who described themselves as 'born–again' or evangelical' Christians.

Still it's troubling that the Jewish community lines up so firmly behind the occupation and, as the J Steet poll found, the slaughter in Gaza (75%). The other day on a comments thread on Jews sans Frontiéres, J. Otto Pohl introduced the concept, novel to me, of PEP, which turns out to stand for 'Progressive Except for Palestine'. While I think it's the case that a proportion of US Jews think of themselves as 'progressive' (17% in the J Street poll), it's hard to reconcile that with the positions they take on Palestine. As far as I'm concerned, anyone willing to countenance ethnic cleansing, extrajudicial executions, depriving millions of political rights, and so forth, is not progressive as I understand the term. When they actually abhor all these crimes in principle, as I'm confident most of them do, but are prepared to look the other way when perpetrated in their name, it strikes me as even more deplorable. Clearly the wisdom of age and the advantages of higher education do not, by and large, insulate American Jewish 'progressives' from this kind of hypocrisy.