The 8 October marked two years since the Richter 7.6 earthquake that ravaged Pakistani occupied Kashmir and adjacent areas of Indian ‘held’ and the North West Frontier Province (NWFP). Official estimates put the immediate death toll at over 70,000, but I have heard no less (and no more) credible estimates ranging as high as 200,000. The quake also left some 3 million to face the bitter Himalayan winter without shelter. There was an inspiring surge of individuals and small groups collecting and delivering clothing, food, blankets, tents, etc. Unfortunately, much of the clothing was inappropriate to both the climate and the cultural sensitivities of the victims and was seen strewn over the side of the road. A donors conference in garnered about US$6 billion, most of it in the form of hard loans, the balance in ‘soft loans’. I have seen nothing indicating how much of this eventuated. Of particular note were the Turkish Red Crescent (Kızılay), which provided some 90 medical personnel, and , which sent 1400 doctors and hundreds of other health workers. Despite their generosity and that of the tent manufacturers ( is the world's foremost exporter of tents), NGOs, overseas groups, and the best efforts of the UN and the Pakistani military, many thousands spent weeks before seeing the first sign of relief. Roads into the Kaghan and adjacent valleys, subject to closure by landslides at the best of times, took a long time to clear. This MapAction map dated 22 October 2005 shows at least 15 impassable blockages on the road between Balakot and Naran. 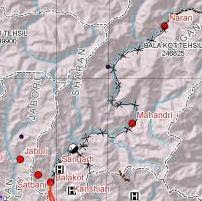 92,000 quake-resistant houses had been completed and another 250,000 were in various stages of completion. He said every family in the affected areas would have a house in six months.

Mr Ahmed said master plans for reconstruction of four severely destroyed cities -- Muzaffarabad, Bagh and Rawalakot in the AJK and Balakot in the NWFP -- had been prepared and were in initial stages of implementation.

Two full years after the disaster, initial stages is good enough for the hundreds of thousands who couldn't manage to squeeze into those 92,000 houses. But not everyopne is as complacent as Lt-Gen Ahmed. In the very same issue of Dawn, Raja Asghar reports,

problems abounded about the reconstruction of the region’s two most devastated towns – the Azad Kashmir’s capital of Muzaffarabad and Balakot in the NWFP.

...Many people in the region blame both military and civilian thorities for their housing problems, such as delays in the disbursement of even a paltry compensation of a maximum of Rs175,000 for a totally destroyed house and complained of widespread corruption such as bribes allegedly received by officials of joint teams for approving construction of homes of approved designs.

Such complaints were more widespread in the quake-ravaged villages but were heard on Sunday also in Muzaffarabad town, where some quake sufferers spoke of bribes ranging from Rs5,000 to Rs10,000 taken by petty officials such as patwaris or other members of local overseeing joint teams to approve payment of compensation.

.. former [Muzaffarabad] mayor Chdhry Manzoor Ahmed...said: “Corruption permeates through their blood. There is no sphere left where these is no corruption.”

Nor are the problems restricted to Muzaffarabad and Balakot. Khaleeq Kiani reports from Bagh in the

People in the urban areas of Bagh – a district of Azad Kashmir that ranked third in terms of devastation after Muzaffarabad and Balakot – are struggling to survive. The official slogan of “build, back better” seems to be a far cry in this district headquarters of Bagh, named so becse its scenic bety.

...A major portion of the town has now been declared a ‘red zone’, but in the absence of a master plan no construction could take place.

The National Engineering Services of Pakistan, which had been awarded the contract about 18 months ago to prepare the master plan, is yet to open its office in Bagh...

Bagh has been divided into four zones -- highly hazardous, hazardous, highly dangerous and moderately dangerous. No part of it falls in the low-danger or safe categories...“The situation remains as it was a year ago,” Dr Atiq [Zahid, a former medical superintendent of the district headquarters hospital] told Dawn on Sunday.

Khwaja Javed Iqbal, chairman of the Anjuman-i-Shehryan, says that residents of Bagh want President Pervez Musharraf to visit Bagh again to see for himself what happened to the promises he had made to the people on his first visit soon after the earthquake. The president had announced that he would convert this challenge into opportunity and said that a new Bagh would emerge from the ashes. “Bagh continues to be in ashes and has in fact turned into filthy debris,” says Mr Iqbal.

The president, General Pervez Musharraf, does not appear to be embarrassed about his complete failure to meet the challenge, exploit the opportunity, or provide desperately needed relief any more than he is about the poverty most of Pakistanis endure or the humiliating bombings his great benefactor, the decider, has been carrying out in Waziristan at a cost of at least 100 madrassa students. Nor is he embarrassed about his attempt to dismiss Supreme Court Chief Justice Iftikhar Chdhry, which aroused a storm of protest and was ultimately reversed by the court itself. Nor about his inability to rein in his acid wielding, DVD burning allies or his hamfisted and murderous handling of the Lal Masjid crisis. And now, after much of the parliamentary opposition had conveniently resigned, and his new mate, Benazir Bhutto's, Pakistan People's Party abstaining, he is not embarrassed to exult in his stunning electoral success.

I bow my head in front of God Almighty for having given me such a great victory.

To put it in perspective, what the media have reported by and large is that he won '252 of 257 votes cast' in the National Assembly and the Senate, seemingly an astounding 98% majority. In reality, those 252 votes comprise just 57% of the sum of 342 members of the Assembly and the 100 Senators. In total, 1,170 national and provincial legislators were entitled to vote, of whom 685, about 59%, voted for Musharraf. Some media are also reporting that he 'ended up with a total of 384 electoral college votes out of 702'. The discrepancy arises becse the way the electoral system works is that each Provincial Assembly has 65 electoral votes in the the presidential election, even though only the Balochistan Assembly actually has 65 members. So a vote by a member of the Punjab Assembly, with 371 members, would only be worth about one sixth as much as Balochi member.

When I first got to , the received wisdom as I understood it was that this was precisely what Musharraf had in mind - to have himself reelected for another five year term by legislatures controlled by his party before the looming general election, due in a few weeks' time. I confess I was dubious that even Musharraf would be quite so shameless as to resort to such a transparently underhanded subterfuge. Even 's soft Islamist Justice and Development Party (AKP) didn't manage to pull that one off when they had the opportunity a few months back. Even after Dubya's August pronouncement that his 'focus' was on a 'free and fair election', the General is not embarrassed to claim reelection.

I have appealed to the nation towards a conciliatory approach, and I have appealed to the -- first of all, the nation, the people of , not to join or reject any calls for strikes and agitational activity. I have appealed to the lawyers to have -- let sanity prevail. They are all educated people, and I hope, in the -- for justice and for peace, they adopt an approach of comes first. On the media, I have asked the media to give the positives, to adopt a balanced approach. I’m the greatest supporter of their independence and give a confidence -- a feeling of confidence, a feeling of feeling good attitude to be developed, mindset to be developed, within the people of . And I’ve also extended a conciliatory approach to all the opposition parties. This is what I’ve done. Thank you very much, ladies and gentlemen.

After all, it would be insane to protest a military dictator pretending to have won a presidential election, again. In the absence of sanity, however, he refuses to eschew declaring a state of emergency should the Supreme Court rule when it convenes next week that he is ineligible to stand - Article 63 of the Constitution prohibits state employees from standing for office. This is, by the way, the same President General Pervez Musharraf, the same great supporter of media independence, who issued an edict not so many months ago banning live reports of demonstrations, among other things. The same guy who had the studios of Geo TV ransacked. Credit where credit's due - the guy's got balls.

Of course, the General is not alone in his immunity to embarrassment. The only reason the election could take place at all was the deal that he reached with Bhutto. Apparently as a quid pro quo for dropping the well evidenced corruption charges against her, she had agreed that the PPP's members in the National Assembly would abstain, but attend the election session, rendering it quorate. Tariq Ali told Democracy Now! presenter Amy Goodman Wednesday

the second time she came to power, her government was incredibly corrupt, and the military then, when Musharraf came to power, charged her with corruption. The evidence is there; it’s irrefutable. And as part of the deal now, this corruption is being ignored, which is making people incredibly cynical.

" is an important partner and ally to the and we congratulate them for today's election. We look forward to the electoral commission's announcement and to working with all of 's leaders on important bilateral, regional and counterterrorism issues,"