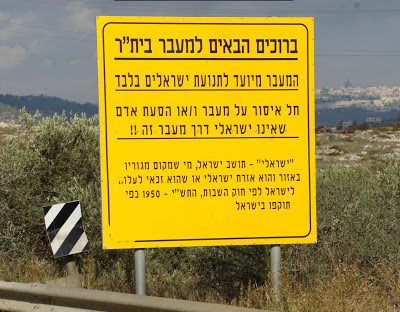 Welcome to Betar Checkpoint
This checkpoint is for the passage of Israelis only.
It is forbidden to pass and/or drive a person through this checkpoint, who is not Israeli!!

"Israeli" - a resident of Israel, a person who lives in the area and is a citizen of Israel, or a person entitled to make aliyah to Israel according to the Law of return, 1950, as valid in Israel

Posted by Ernie Halfdram at 08:05 0 comments

Raining on the parade

With Palestinians in their thousands dancing in the streets of Ramallah and Gaza and even Beirut, what better time could there be to rain on the parade?